NO PRICKLY ISSUE FOR BLONDIE AND BEST PAL SMITH... 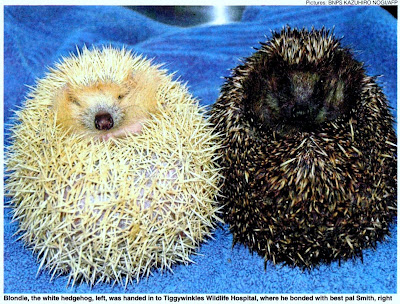 This adorable image shows an ultra-rare blond hedgehog rescued by an animal hospital.

Blond, or leucistic hedgehogs, have a partial loss of pigmentation which results in pale colouration of everything other than the eyes.

This particularly cute example, aptly named Blondie, was brought into Tiggywinkles Wildlife Hospital in Aylesbury, Buckinghamshire, late last year after wandering around during the daytime suffering from malnutrition.

Blondie had been born in August and should have weighed 600g but was only a quarter of the size at 165g.

The tiny mammal was rehydrated and given antibiotics by the centre's nurses.

Soon after arriving at Tiggywinkles, Blondie befriended a hog named Smith and has gone from strength to strength and is now fighting fit.

Despite the clean bill of health, Blondie has a weak immune system and will never be released into the wild.  The unusual colour would also be an invitation to predators.

Sharon Jacobs, a nurse at Tiggywinkles, said:  "Blondie was very underweight when we got him and not at all in a good state.

"Had he been in the wild for much longer there's no way he would have survived.

"Soon after arriving here he made a friend and things started to really look up - his health rapidly improved.

"We separated Blondie and Smith when they reached 400g, as you're supposed to do, but Blondie didn't like that one bit so we put them back together."

Awwww...but the Daily Express...urghhh. At least you don't read the Daily Mail I suppose.

I usually don't even read The Daily Express, CJ - apart from the excellent Calvin & Hobbes strip in it.

Actually, my mother's favourite paper was the Daily Mail but she had zero interest in politics.

At one time, as a young man, I occasionally used to buy The Sun. There were a couple of points I found interesting in it. (And it had Hagar The Horrible.)

Awh, what a little beaut! Is leucistic the same as albino?
I'm now ashamed to admit that I also used to buy the Sun, but only for Wack, but I didn't know it was a Tory paper, until the late seventies ( I never read the political ( boring ) stuff!

Not sure, JP, it would depend on whether Albinos' eyes are colourless or not. (Meaning I'm too lazy to look it up.)