THIS SURE TAKES SOME LICKIN'... 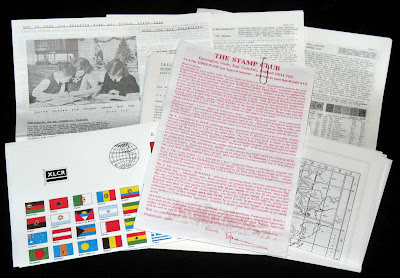 It was back in the late '60s, in Room 7 of my primary school one
day, that I espied the magnifying glass.  It was in the hands of one of my
classmates who was using it for the purpose for which it was designed.  (No
surprise there, really - what else is a magnifying glass for?)  I was fascinated -
it was such a small magnifying glass, and I immediately wanted one for myself.
"Where did you get it?" I enquired of him.  "I got it as part of a free stamp col-
lecting kit I sent away for" was his response.  That was the magic word for me -
"free".  I had seen the ad for such stamp kits in the comics I bought, but I had
never paid them too much attention before.  I decided there and then that I
would send away for such a kit the first chance I got.  Nothing would deter
me, my mind was made up.  I wanted a mini-magnifying glass of my
very own and, by thunder, I would have one. 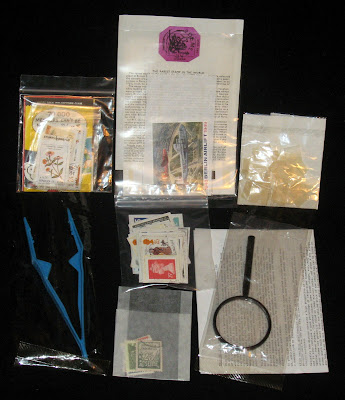 Close to 30
odd years later,
when I eventually
got around to send-
ing for it (quite a
few years ago now),
it could well have
been from the very
same stamp dealer as
my long-ago class-
mate had acquired
his - D. J. Hanson
Ltd., Eastrington,
Goole, East Yorks,
England, DN14
7QG, who advertised
extensively in British
comics of the time
(and is still going
strong today).

The much-coveted magnifying glass wasn't exactly the same as the
one I remembered, but it was good enough for me.  I felt the satisfaction
that comes from finally fulfilling some long-held purpose or ambition that
should have been accomplished years before.  In fact, I wish I could sit in
that classroom now, at my old desk, and employ my magnifying glass in the
way I would've done back when I was a kid.  No, not to read tiny print in
one of my school books, but to capture an errant sunbeam and direct it
towards a patch of skin on someone's bare thigh (short trousers in
my day, remember) and wait to see them jump.

I do sort of collect stamps actually, but on an extremely limited scale:
Christmas stamps, TV, movie, and comic characters, etc.  I couldn't fill a
whole album, but I've got enough to keep me occupied for an hour or so, on
cold, rainy nights when the wind is howling outside my window, bearing
aloft familiar childhood voices and visions from so very long ago.
Posted by Kid at Monday, May 14, 2012

Ok,you get the stamp of approval on this one.Good reminiscence as i also remember those ads and their promise of a world of joy and pleasure collecting stamps...Hmm.
Like yourself though,i too always wanted a magnifyind glass,not to burn my fellow classmates(always thought you hid some kind of sociopathic disorder behind that sweet and gentle exterior..lol),but more importantly,to create fire! Yes,to ignite that primitive desire that all young boys have of creating combustion with just the basics of a magnifying glass,a piece of scrap paper and that glorious source of power freely available to all and sundry,yes folks,the Sun! Who needs matches,Bah,boring!!
What power to be wielded by a magnifying glass.i can still feel that frisson of excitement coursing up my spine at the thought of such potential for mischief and skulldugerry in my hands.Oh,that and a catapult...but thats another story.

Quick - someone give that man a blog of his own before he sets fire to something. And guess what, mystery writer - I've still got my Milbro catapult. If I find my bins burning, your windows are getting it.

Kid, I remember in the 60s you could send off for books of stamps on approval. A little book arrived and you bought what stamps you wanted and sent the book back with monies for those purchased. I think I had a book with USSR space issues and I badgered my parents into buying me a few. I wonder how many kids who were a bit more street savvy than me just kept the whole book anyways. It did I suppose teach a sense of responsibility and honesty.

Happy days, Ken, eh? We were easily pleased back then - not like today's spoilt kids.