Carrying on from where we left off, let's take a look at the final part of the 1968 issue of BUSTER which I've been serialising over the last few weeks.  Apart from a few ad pages, you now have a complete issue of ANDY CAPP's lad's very own comic to peruse at your leisure. 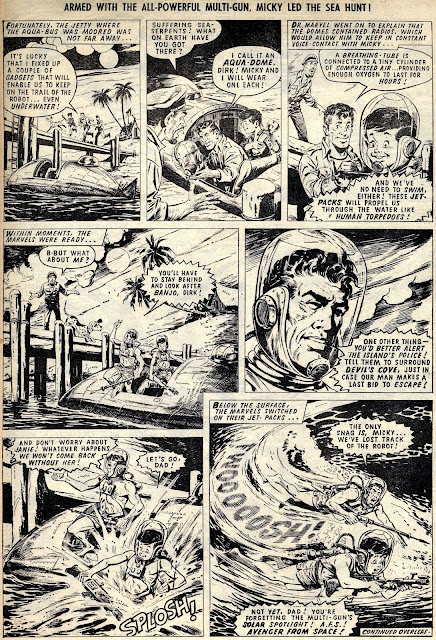 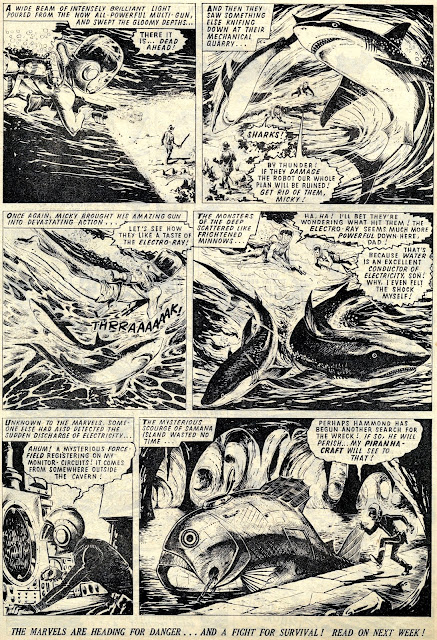 MICKY MARVEL'S MULTI-GUN first appeared in the issue dated for January 20th, 1968, and ended a year later on January 18th, 1969.  The strip was drawn by CARLOS CRUZ GONZALEZ, who'd illustrated quite a few features for IPC/FLEETWAY and also D.C. THOMSON.  He was one of the artists who drew DAN DARE in the relaunched EAGLE back in the '80s. 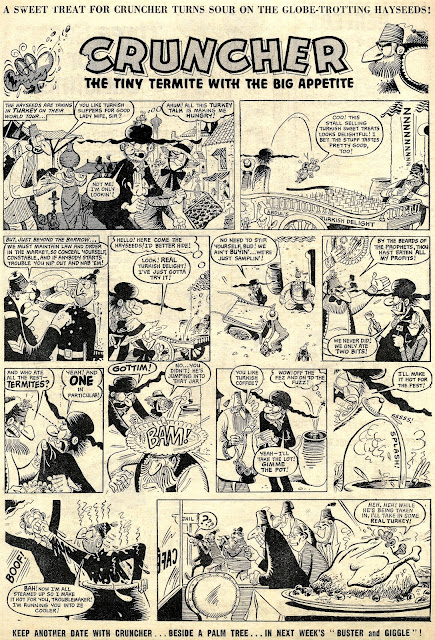 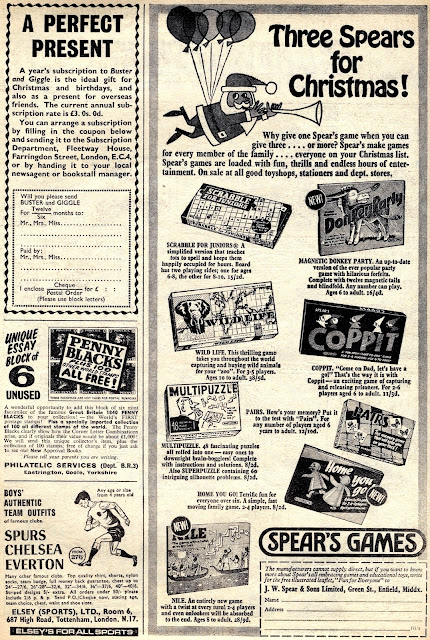 I've included some ad pages just to give you a taste of the times.  Anyone know how many of these games are still available today?  (Probably all of them... if you haunt the charity shops.) 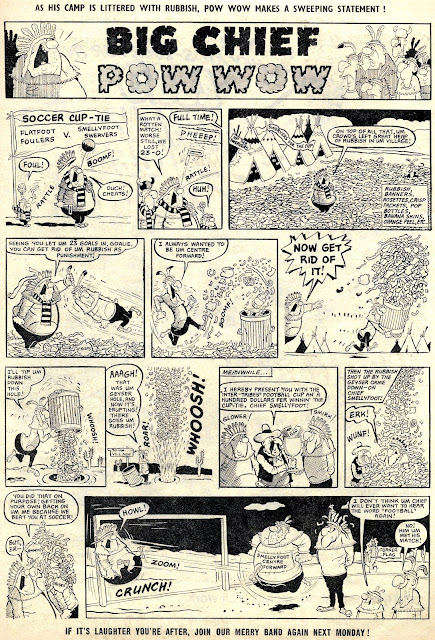 BIG CHIEF POW WOW was, in some ways, a return to LITTLE PLUM territory for LEO BAXENDALE.  The character debuted in the cover-dated September 14th, 1968 issue and concluded in the one dated for January 31st, 1970. 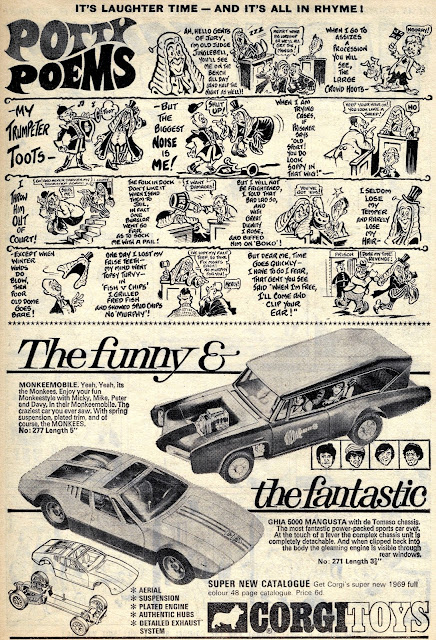 Look at the above ad.  Nowadays, a CORGI TOYS MONKEE- MOBILE from the '60s would probably set you back at least a couple of hundred quid for a good condition model in its original box.  Bet you wish you'd kept yours, eh?  Too late, it's gone.  Get used to it. 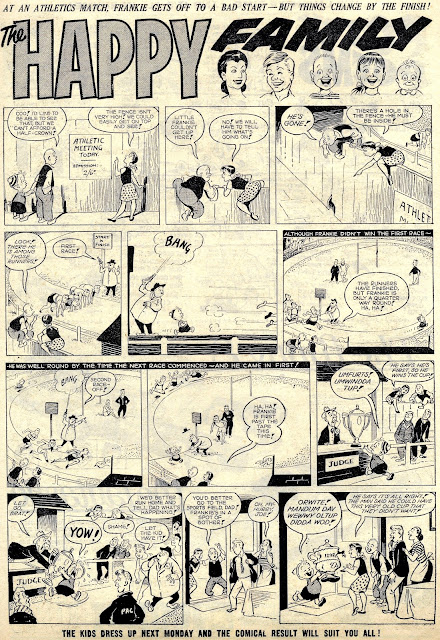 The HAPPY FAMILY (does such a thing exist these days?) was drawn by the always excellent REG PARLETT.  Apparently, early episodes were reprints of a strip called The HARTY FAMILY, which had first appeared in TV FUN, but whether or not it was based on an actual TV series, I'm far  too lazy to try and ascertain.  The strip made its first appearance in Buster in the cover-dated issue for August 17th, 1968, and took its final bow in the issue dated January 4th, 1975.  Though whether or not it was an uninterrupted run I'm unable to say.  ('Cos I don't know.) 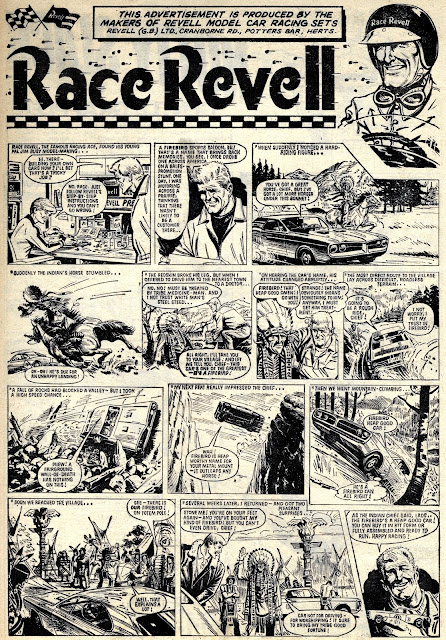 Another ad - I doubt the readers were ever too enthused about the exploits of RACE REVELL, though the model company which spawned him still exists to this very day. 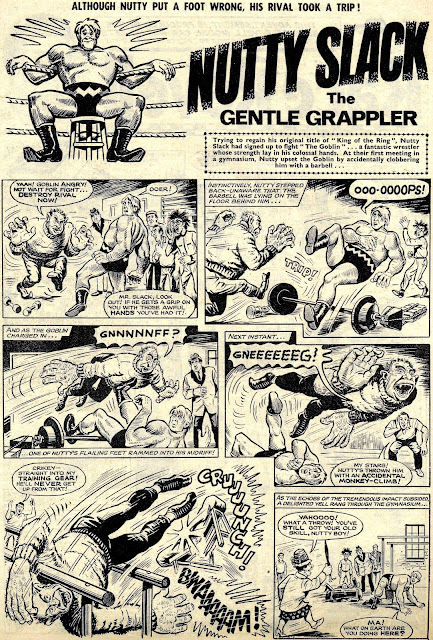 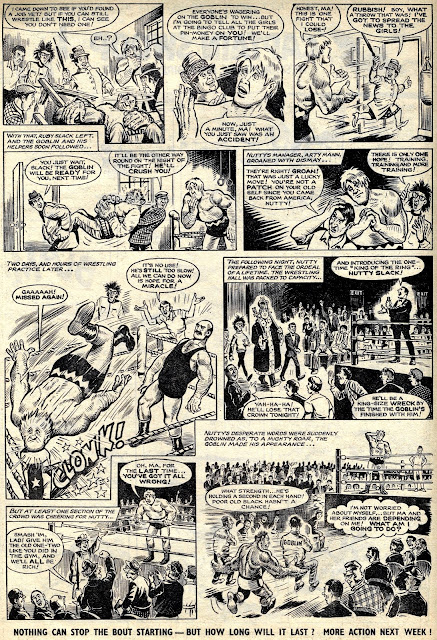 NUTTY SLACK  is a type of coal, as well as a brittle toffee sweet containing nuts.  However, in the case of the character appearing in Buster, he's exactly what it says on the "tin" - a gentle grappler.  First turning up in the issue dated for September 10th, 1966, he ended his run in the December 28th, 1968 issue.  Drawn by DOUG MAXTED, who also illustrated HIS SPORTING LORDSHIP in the new SMASH! comic from 1969 onwards. 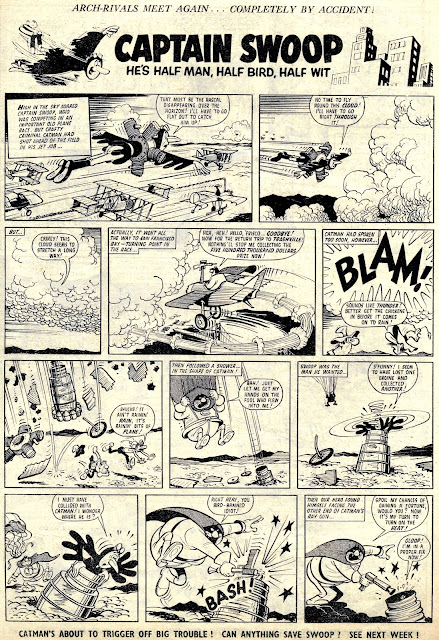 CAPTAIN SWOOP first appeared in a short-lived comic called GIGGLE (of which I have the bound volume of FLEETWAY file copies from the period), moving over to Buster when the two comics merged on January 13th, 1968.  (Issue dated 20th.)  It was a translated reprint from a French comic strip, and managed to hold on until the issue dated for April 19th, 1969, whereupon it retired into history.  Whether or not the original strip still runs in France is anyone's guess.

Anyway, there you have it.  A complete issue of Buster (minus a few ads) from 1968.  Hopefully, you've enjoyed this glimpse into the past as much as I enjoyed my red-hot date with SALMA HAYEK last night.  (Whaddya mean dreams don't count?)

COMING SOON:  The first appearance of SWAMP THING!
Posted by Kid at Thursday, May 31, 2012

Bound volume of Fleetway file copies of Giggle – that’s an item I’d very much like to have in my collection! Was it you who won it in the Compal auction a couple or so years ago? I bid on it but wasn’t generous enough and it went for 300+ quid, if I remember correctly…

Nope, I was given it (along with several others) by an IPC editor well over 25 years ago. Usually two bound volumes were kept - one with a label of the cost of each strip pasted onto the page, and one without. Although, I'd assume the one that you refer to was perhaps privately bound by some collector.