WHAT'S GOOD AND BAD ABOUT THE NEW DANDY?

Here's what's right with it - full-colour, good paper ('though
it tends to smudge), some well-drawn strips, and smatterings of
irreverent humour in the small print on the inside back page.

Here's what's wrong with it - in some places, amateur lettering,
clumsy placement of word balloons, roughly-rendered logos which
are too similar (no individual identity), and some inadequately
drawn sequential art, which could be vastly improved. 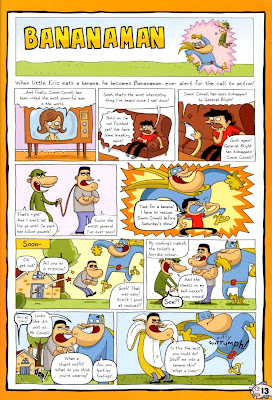 Take BANANAMAN -
never liked the character and
didn't care much for the old
version of the strip, although it
was drawn in a highly competent
and professional manner.  So, I
therefore don't have a problem
with the new art style and direc-
tion for the hero.  (No doubt
many fans of the original might
disagree.)  However, it could
stand some improvement in the
following areas.  Upper case
lettering in the word balloons,
slightly bolder exterior lines on
the characters to make them
stand out - and more space in
the frames to accommodate the
lettering so that the art isn't
obscured by it.  Same goes
for PEPPERONI PIG.

And why do I feel that I'm viewing many of the strips through the
wrong end of a telescope?  Everything seems to be in long-shot - even
the close-ups.  (No complaints about HARRY HILL whatsoever.)

Had I been the editor, I'd have made sure problems like these
had been resolved before the strips had gone to press.

Another thing - some defenders of the new DANDY claim that
it's aimed at kids, but if that's the case, why does some of the art
look like it belongs more in PUNCH or PRIVATE EYE?  Not that
that's necessarily a bad thing, but they seem to want to have their
cake and eat it too.

Hopefully these problems will be fixed sooner rather than later.
Feel free to agree or disagree - or even ignore - I don't care.
Posted by Kid at Friday, November 05, 2010