You're looking at my very own Kenner Super Powers Superman figure (above) from 1984.  I bought it in John Menzies in my hometown, along with a couple of Brainiac figures, one for me and one for a friend's son, both of whom were with me at the time.  We then repaired to Baird's tearoom on the top floor of said establishment, whereupon my pal's boy, on seeing my Superman, wanted it instead of his Brainiac and started to cry bitter tears over it.  I assuaged him by saying that Superman was a wimp compared to his foe, and that Brainiac was the toughest guy in creation.  That did the trick!  He was soon engrossed in the silver figure, and I'd managed to avoid having to give him my Supes in order to shut him up. 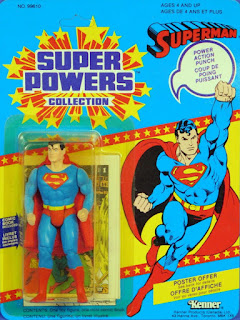 Curiously, some areas of Superman's blue costume have darkened over the years, and I'm not quite sure why.  I took a look on eBay at other figures and noticed that a few of them had likewise suffered the same discolouration in the same places.  I was also astonished to see some of the asking prices for the 1984 Super Powers range, especially Superman.  Battered and blootered ones go for around £15, right up to several hundreds for unopened ones in their blister packs.  My original blister pack is in a box up in the loft somewhere, so I've borrowed an image from eBay to show you what it looks like.  The second figure is a recent release by McFarlane Toys, again harking back to the Super Powers range, but with the figure 'paying homage' to the original without being an exact duplicate of it.  Once again, the carded image is from eBay. 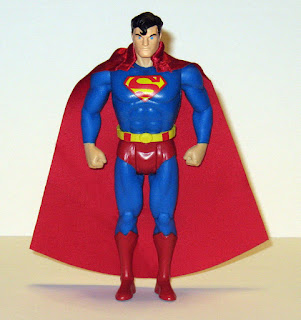 In case you're wondering, the difference in the density of the blue of the costumes between the two toys is due to a switch from lighter to darker in the comics sometime around the '90s, I think.  Why?  I can only hazard a guess, but I assume it might have been simply to give Supes a more dramatic impact on the printed page.  Anyway, funny how things come around again after so long a time, isn't it?  Having bought the original Super Powers Superman figure (which, contrary to the claims of some, is not a doll simply because it has points of articulation) in 1984, I felt compelled to buy the 2022 incarnation of the toy, very nearly 40 years later (38 to be precise).  I almost feel like I'm 25-years-old again.  (If only!) 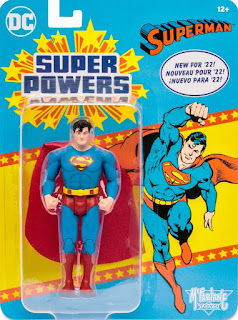 Like I said, for the sake of convenience, both pics of the figures in their blister cards are from eBay, though the unwrapped figures are my very own.  Which figure would you say was best, the '84 or '22 version, or don't you have a preference?  And if you see this, McS, don't try and fool your fellow Crivvies - we all know you'll be running out to the shops to buy the second version of the toy the moment you've read this post, ya big wean.  (Incidentally, Crivs, the string you see around Kenner Superman's waist loops up under the neck of his cape; I attached it years ago so that I could hang him on a pin to display on my wall.) 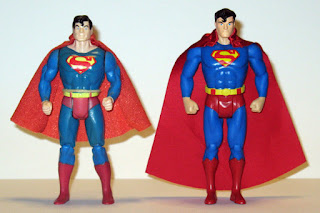 Why does the newer figure have a much bigger cape?

Because he's much more of a show-off, CJ. He's also got a much bigger 'S' emblem on his cape. There's just no need for it.

As an adult ( well over 13 years) I was never really a fan of action figures Kid so they aren't on my radar as a collectable. I only liked comics. I do look at the models ( the action scenes etc) in the shops and some are spectacular as are the ticket prices.

I sent a highly humorous "dolls" reply a few days ago tk you, but it must gave gotten lost . Or you binned it :)

It definitely must've got lost, McS, otherwise I'd certainly have published it. How else would I be able to demonstrate my own wit and humour if I didn't take the opportunity of responding to that of others? Send it again if you remember what you said so that I can show off with a clever retort.