KELLOGG'S CEREAL GIVEAWAYS - HOW MANY DO YOU HAVE? 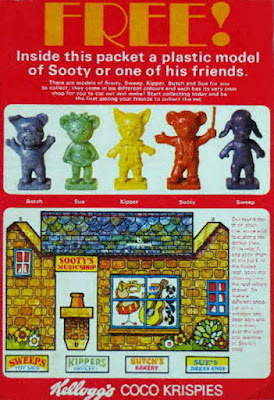 The ol' memory must be failing me, alas.  The above SOOTY figures (completed today) are listed on a couple of sites as being giveaways from KELLOGG'S in 1973, but I'm sure I had some of them before I moved house in June 1972, so I'd date them around '70 or '71.  Is my recollection playing tricks on me, or were they possibly reissued in '73?  Anyone know?  The other figures in this post came out around 1970, so maybe I just automatically (but erroneously) associate the Sooty ones with them. Anyway, I'm sure my inability to recall the exact year will bug me more than it does you.  (Note that SOO is spelt as SUE on the back of the packet.) 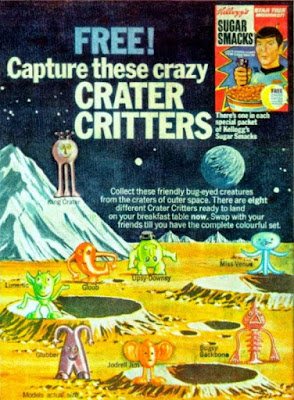 Next up (above) is CRATER CRITTERS, which are arguably the ones that most folk more readily remember.  I had most if not all of them at the time, but the ones above I bought from regular reader PC a few years back, who sold them to me for far less than he would probably have got on ebay.  I don't buy things to sell on, so he knew I wasn't going to make any financial gain from his loss.  My favourites were BUGSY BACKBONE, LUNERTIC, and JODRELL JIM.  Quite liked GLOOB as well.  I'm keeping my eye out for others so that I can get a more varied colour scheme. 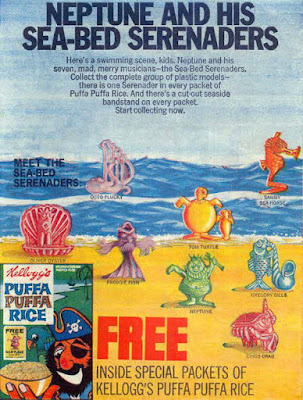 Finally, we have NEPTUNE And His SEA-BED SERENADERS (above).  In the UK we were offered only 8 figures, but in Australia (where they were issued first, I believe) there were 15 of them.  I also bought these ones from PC, who lives in Australia, so I'm lucky to have the full set.  Sharp-eyed readers will have noticed that I've replaced the photos with fresh ones (yes, pun intended), so FREDDIE FISH is now facing the right way.  I probably had a few of these figures back in 1970/'71, but the one I most remember is NEPTUNE.

If you had any of these sets when you were a kid, feel free to reminisce to your heart's content in our crazy comments section.
Posted by Kid at Saturday, June 29, 2019

Nice to see these characters again!, I knew that they were going to a good home and someone who would appreciate them a tad more than I, seeing as they'd been in storage over here for many a year. Never knew that the UK had only 8 of the Neptune series, must be one of the few instances where Australian had a better deal.

We are currently getting short changed in regard to Mattel's Jurassic World Dinosaur range with only a fraction of the releases making their way over to these shores and the crazy prices on eBay for many of these missing links, as it were, makes getting hold of the ones we've missed quite prohibitive. Not for the first time that collectors are being preyed on by greedy opportunists.

And even when the price of an item is fairly reasonable, it's the cost of postage which is prohibitive, PC. I've seen items priced at a few quid, but the cost of p&p is £40-£50, so surely the seller is making a profit on the postage more than the toy or comic? I've had things sent from America at a fraction of that, so I know the postage doesn't have to be that high. Hope you manage to get your dinosaurs for a more reasonable price.

Going by the ads, LH, none of these ones were given away with Cornflakes. However, it's always possible that they were first included in one cereal, then later another. Any Criv-ites know for sure?

I might just add of the cereal novelties that I still have there is the full set of both Pirates and Daffy Dogs, while I have more than half of the Funny Fringes, Society Zoo and Toolie Birds, plus some doublse of the Crater Critters and Neptunes (but not a full set of either of these).

Tend to appreciate these a bit more now so I think I'll hang on to what I still have and try to work out a display solution for them, if I can find any space that is not taken up by Dinosaurs, extant animals and movie merchandise!

I might've seen the Pirates, but the others you mention don't immediately ring any bells, PC. Could they be exclusive to Australia? I might track down the Magic Roundabout figures one day, and if I can get a TB1 and TB3 I'll be very happy chappie.