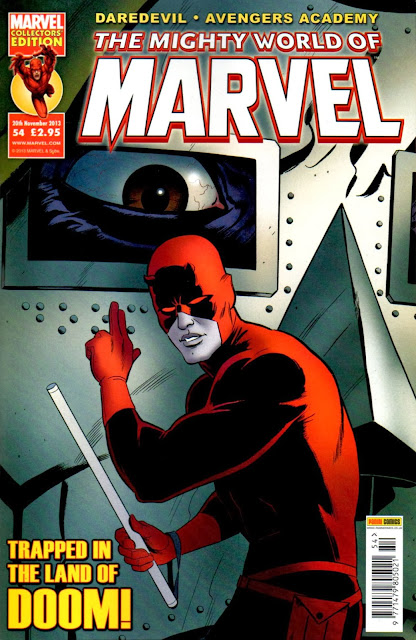 There's something extremely reassuring about still being able
to purchase a comic that first came out a whopping 41 years ago
and which I bought as a teenager. True, it hasn't been an uninter-
rupted run over that period, but the present incarnation of THE
MIGHTY WORLD OF MARVEL is now over 10 years old.
In the current issue, DAREDEVIL battles the forces of MEGA-
CRIME in an epic showdown - and finds himself trapped in the
deadliest country on Earth: LATVERIA! Don't miss the shocks!
By MARK WAID, KHOI PHAM and CHRIS SAMNEE!
Also: the AVENGERS ACADEMY students and the RUN-
AWAYS take a trip to prehistoric Earth - but will the two teams
become friends or bitter foes? By CHRISTOS CAGE and
KARL MOLINE!
ON SALE NOW!
Posted by Kid at Friday, October 25, 2013

MWOM is probably along with Wham, Smash and Valiant my all time favourite comic. When Pannini relaunched it I picked it up again every month for about 4 years (and still pick up the odd issue) - but it's just not the same to me. Despite being really nicely produced and in full colour (everything we wanted from UK Marvel in the 70s lol) and indeed very good value for your money, it's a bit - well, sterile unlike the more instant weekly (which I have to admit was messy in places especially after the first couple of years). Maybe it's just misplaced nostalgia - but you're right - nice to see a familiar title on the racks - saying that, the Samnee Daredevil is really good (and one of the few US comics I pick up each month) and has more than a tip of the hat to the 70s strip. McScotty

My favourite incarnation of TMWOM had to be Vol. 2 in the 80's - magazine-sized, bumper thick, full colour, stiff cover and bursting with all the mini-series that I couldn't get ( but wanted ) on this town. It seemed to be tailor-made just for me!

Wham! and Smash! were two of my favourite comics too, McS, but I really only bought Valiant once it had absorbed Smash!

Shame about the dodgy, out-of-register colour in the first issue or two 'though, eh, JP? If I remember correctly, it only lasted 17 issues (which I've still got).

Yeah , the writing was on the wall for Marvel UK in the late 80's . I did my best to keep them afloat by buying every title throughout the 80"s - I stuck with them to the bitter end with Exploits & (90's) X-Men, but everything had merged with everything else and disappeared. The 90' s was a sad decade for comics for me.During the 80's the newsagents used to stock bundles of about 20 or so DC titles & the same number of US Marvel, but these became over-priced and disappeared ; 2000 AD had changed beyond all recognition (apart from JD). In the 00's, every time.I tried to get into it again or the panini/titan comics, I just couldn't understand what the heck was supposed to be going on. You explained the reasons behind this in an early post - that they only cater for adults now! Well I, for one, would prefer to be still treated as the kid that I still am! ( sound familiar? )

I know there are other factors involved, JP, but I sometimes wonder if comics' drift away from the kids and teeanage audience (in the case of U.S. mags) and the decline in their circulation is something more than a coincidence.