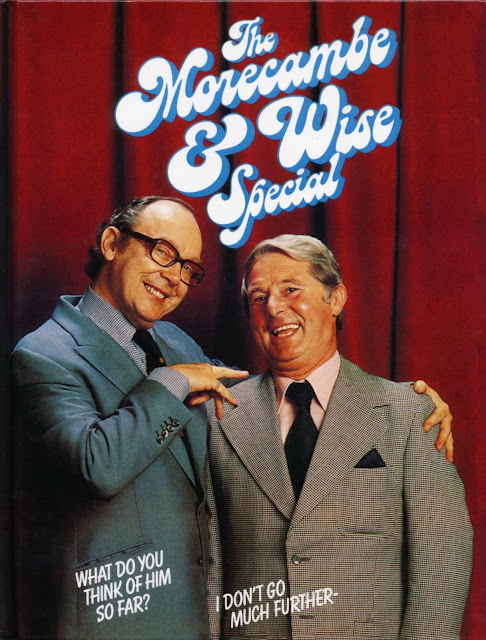 British audiences require no introduction to MORECAMBE
& WISE, who, for many years, were probably Britain's best-loved
comedy duo, rivalled only by THE TWO RONNIES. Eric and Ern's
TV Christmas Specials got record-breaking viewing figures that many a
programme today would kill for. While still at the peak of their success,
publishers WEIDENFELD & NICOLSON released a hardback book,
THE MORECAMBE & WISE SPECIAL in 1977, with W.H. ALLEN
& Co., Ltd releasing the softcover edition (under the imprint of
STAR BOOKS) a year later.

I guess there must have been a demand for it recently, because
a facsimile edition of the original hardback volume was published
in 2009. If you missed it and can't live without it, you'll no doubt be
pleased to learn that the POUNDLAND chain of stores currently have
loads of the book in stock for - surprise surprise - £1. If you were a
fan of the twosome back in the '70s, the book is a nice little reminder
of a vanished era and can still raise a chuckle or three.

Comics fans in particular will be interested in the four page comic
strip featuring Eric & Ernie, drawn by TERRY WAKEFIELD and
written by DENIS GIFFORD. At a mere pound, how can you lose?
Posted by Kid at Wednesday, October 05, 2011

I probably won't buy the book, as I have loads of M&W on DVD. Ant and Dec are such sorry substitutes.

It's a nice little collectors' item, Martin, as it was a one-off as far as I know. And it's only £1. Go on, push the boat out and live a little.