THE DALEKS - POETRY IN MOTION...

Oo-er! It's Doctor Who & The Diabolical Daleks... 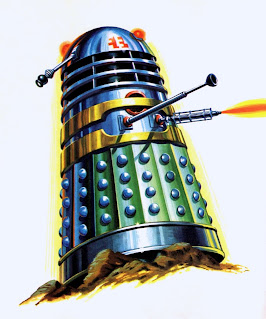 Doctor Who was in his TARDIS,
which can move through time and space.
Thought he'd go and tease The Daleks,
self-appointed 'Master-Race'.

Off he went to Planet Skaro,
spinning through the endless void.
Righting wrongs while facing danger
were the things he most enjoyed.

When he landed he soon noticed
what a fearful place it was.
But the Doc was used to walking
into danger's gaping jaws.

Off he marched to find their city,
when he got there, no surprise -
Daleks soon had him surrounded,
ray guns waving, stalks for eyes.

But the Doctor, nothing daunted,
(did you know he's got two hearts?),
had a lethal secret weapon
known as Gallifreyan farts!

Stuffed his face before he landed
with a dozen tins of beans.
Knew he'd need a huge advantage
to defeat those Dalek fiends.

Popped off farts in all directions -
My!  Did those guffs really rate.
Solid objects?  Easy targets!
Farts they can't "exterminate".


Soon the Daleks were in turmoil,
trapped within their metal shells,
There was simply no escaping
nauseating farty smells.

He was soon back in the TARDIS,
showed those Daleks he was smart.
They'll give him a wide berth next time -
now they know Time Lords can fart.

As he travelled in his TARDIS,
put his feet up, drank some tea.
That's the way it really happened -
just as he told it to me.
******
Delbert - The Friendliest Dalek In The Universe... 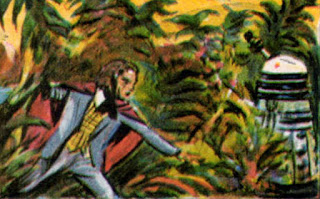 Delbert Dalek was an oddball,
simply just did not belong.
Wouldn't answer to the shrill call,
thought 'extermination' wrong.

Delbert's Dalek-heart was loving,
such a gentle, friendly soul.
Didn't go for people-shoving -
cosmic conquest not his goal.

All the other Daleks plotted,
didn't want him in their ranks.
With his single eye he spotted
their approach from all four flanks.

Although Delbert was a softie,
he got quickly off his mark.
Never mind pretens'ons lofty,
scarpered off into the dark.

As he cowered all a-tremble,
hidden by concealing rocks,
something started to assemble -
an imposing big blue box.

Doctor Who had come to rescue
Delbert from the Dalek throng.
Del had not and never would do
anything remotely wrong.

"Quickly, Delbert, I will save you,
jump in to my time machine."
So he did and off they both flew,
rescue's seldom been so clean.

Delbert now lives down in Southsea,
has a cottage all his own.
In his garden he sips green tea,
green tea he himself has grown.

All the neighbours really love Del -
wave when passing his front gate.
When the postie rings his doorbell,
it chimes out "Exterminate!"
Posted by Kid at Sunday, November 22, 2020