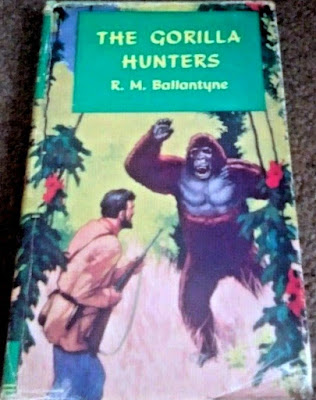 I may still have my original copy of R.M. Ballantyne's book The Gorilla Hunters up in my loft somewhere.  If so, it lost its dust-jacket long ago, but I still have an image in my mind of what it looked like.  I wouldn't even know which box to start on in search of it, which is why I bought a 'generic' copy on ebay a month or two back when I fancied re-reading it 47 or so years after the fact.  At a guess, I was given it in 1969 or '70 as a Sunday School prize for regular attendance (not that I wanted to go), but I didn't get around to actually reading it until 1972 or '73.

At least that's the way I remember things, but my memory isn't quite as sharp these days as it once was.  I enjoyed reading the book again, though more from the perspective of revisiting a past pleasure than it being a particularly gripping book.  I remember taking it into secondary school with me one day and reading it in one of the annexe huts at the back end of the 'Old Block', but whether I'd started the book prior to then is now beyond my ability to recall with any certainty.  (Though in memory I was back in that classroom when I started reading it again, if that counts for anything.)

As an aside, the teacher in that hut once said an interesting thing to me, though I couldn't say whether it was on that day or another one.  "Gordon, you can tell you're an artist, because of your handwriting.  You've probably got the best handwriting in the school."  I find that interesting because I'd also been specifically commended for my handwriting in my two primary schools, so that made my ability to produce pleasing penmanship unanimous.  Perhaps I was destined to be a calligraphic artist from an early age, eh?

(Fairness demands I mention the fact that, when I later changed my style to using loops in my writing in the way that my mother did, another teacher said "Considering you're so good at drawing, it's surprising that your handwriting is so terrible."  I soon reverted to my previous style.)

Anyway, back to the gorillas.  In the late '70s I bought The Coral Island by the same author, published in 1857, four years before The Gorilla Hunters (which featured the same three main characters as the first book, but older).  Again, I no longer recollect (at the moment of typing, maybe it'll come back to me) whether I happened upon The Coral Island by chance, or specifically acquired it because I'd read its 'sequel' several years before.  I'd have to re-read 'Coral' before I could tell you if it's as good as I remember it to be, but my general impression is that it was superior to 'Hunters'.

(Interestingly, R.L. Stevenson was so impressed by 'Coral' that he based features of Treasure Island on parts of it.)

The word 'nigger' (singular and plural) is used quite profusely in 'Hunters' (which is set mainly in the African jungle), but not necessarily in an intentionally insulting or demeaning way, and certainly not in a way which suggests that Ballantyne may have been a racist.  In fact, I could detect no negative attitude towards Negroes in general, and the three white protagonists seem to have a fond and respectful regard for the tribes (and certain individuals) they encounter.  The book was written in 1861, so is obviously a product of its time, but probably best not to read it if you're easily offended by the language of a vanished age.

Anyway, to round this off (you'll no doubt be glad to hear), I saw a copy of the book with the dust-jacket I remember on ebay and bought it yesterday (the book, not ebay), so it's hopefully winging its way to me as I type.  That's the seller's photo at the top of the post, but I'll replace it with a scan of the cover when the book arrives.  (It'll be good to be reunited with yet another aspect of my past.)  Anyone else ever read The Gorilla Hunters?  If so, what was your impression of it?  Hit or miss?

Yes, it's silly to take offence at the language and attitudes of long ago. I own an e-book called "Necronomicon: The Best Weird Tales Of H.P. Lovecraft" and one of the stories, "The Rats In The Walls", features a cat by the name of Nigger Man. According to Wikipedia, other publications of this particular story have changed the cat's name to Nigerman or Black Tom etc. I'm glad that Gollancz decided to treat its' readers like adults and let us see the story as originally written.

I've just bought a new laptop (a Chromebook) from Curry's which I have to pick up from the store tomorrow. The First-Minister of Wales has just announced a 17-day lockdown, beginning Friday, so I'm glad it doesn't start tomorrow!

I'll be needing a new computer myself before too long, CJ, as mine is just about obsolete. Haven't read any of Lovecraft's tales that I remember, though it's possible that I've read one or two and then forgotten them. Maybe I'll re-read The Coral Island one day, who knows? If I'm lucky I've only got another 40 years ahead of me and there's just so many things still to do.

I don’t recall but I absolutely remember the Willard Price adventure books.

Don't think I've heard of them, PS, I'll look them up.