POST FROM THE PAST: ANYTHING CAN HAPPEN IN THE NEXT HALF HOUR...

﻿﻿﻿﻿1965 was the year I got my rubberband-powered STINGRAY by LONE*STAR. There was also a clockwork version which looked pretty much the same (see below), but it was the cheaper version I had.  Cheaper, but no less fun at the nearby pond just along the road from where I lived at the time.  And there was also the kitchen sink or the bath for Stingray to continue its undersea explorations when I couldn't be bothered going out or the weather was against me.
﻿﻿
I acquired a replacement for this toy a number of years back and have it proudly on display.  VIVID IMAGINATIONS produced their own, far more detailed version of this craft sometime back in the '00s, but there's something about the '60s original which is hard to beat.  The above two pictures are from the Internet - the one below is of my own toy.  For this 'update' I've also included a few of the Vivid Imaginations version from 2001/'02.
The VI version works on the same principle as the LS one, though is a little more sophisticated.  The rubberband on the '60s toy is wound by rotating the propeller, whereas the '00s toy has a 'dial' on the bottom which you rotate clockwise.  Interestingly, some of the blue areas now appear green, so I assumed the colours had faded over time (it hangs on my wall), but when I checked my unopened spare which has been wrapped in a bag and kept in a cupboard for decades, it was the exact same.  However, I'm pretty sure the green was blue when I first bought them (from my local Woolworth's), so don't quite know what happened there.  Still a cracking toy though, eh? 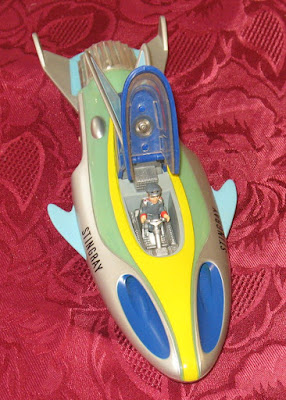 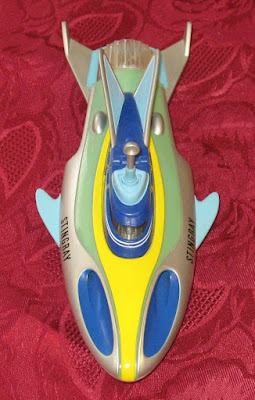 My grandson of 5 loves playing Stingray in the bath. But where are YOUR sting missiles Captain Kid....see what I did there? Yes he plays with the 60s toy! Yes, plays with it. Astounding collectors everywhere!

Always fun to see these again, this was my favourite toy back in 1965/6 when I was a child.

Sting missiles tucked away with bubble pack, S4A, so as not to lose them. (Yes, I saw what you did there, hee hee.) Vivid Imaginations made some good Anderson stuff, didn't they?

Amazing how much fun we could get from a piece of plastic with a rubberband, eh, McS?! (As long as we had a container full of water to sail it in.)

Great post. Kid. I think that Stingray is my favourite design of all the SuperMarionation craft, closely followed by Thunderbird. 2. I never had a motorized Stingray, just the Airfix kit (from Lyons Maid) which I never dared float in the bath.

Stingray was the one Anderson show I actually saw as a kid. Loved it then and now! And I'd have loved these toys too. Thanks.

Stingray is a great design, B. If you see its silhouette from above or below, it has a genuine 'fish'-like look to it. I also like Thunderbird 2, though my top favourite is Fireball XL5 - but that's probably nostalgia talking. And Supercar was a belter as well. Come to think of it, I don't think there was a bad design among the lot of them.

Stingray was also the first Anderson show to be made in colour, RJ, with a specific eye on the US market. I really wish they'd colourise the Supercar and Fireball series (they've done the odd episode), as it would breathe new life into them and likely pave the way to them being shown on TV to a new audience.

"Come to think of it, I don't think there was a bad design among the lot of them."

I would be in complete agreement bar one - Mac's car from "Joe 90"; aerodynamically totally implausible (okay, so is Thunderbird 2, but at least TB2 looks terrific) and just ungainly in appearance...it looks like it might have been one of Brains's rejected designs for Thunderbird 6.

"Stingray was also the first Anderson show to be made in colour"...I've read here and there that it was actually the first *British* TV show shot in colour, not just Anderson...indeed, forward thinking on someone's part.

I don't mind Joe 90's car, BS. The one I'm not so keen on is the Eagle Transporter, which reminds me of the skeleton of a fish. Although Stingray may well have been the first UK series to be made in colour, I think there were earlier 'one-off' colour programmes prior to that - even though the UK didn't have colour TV at the time.

That's how it's always looked to me, CJ. And the cockpit cabin is just a reworked version of TB2's.