Take a look at this Burke's Law strip from TV Century 21 #2.  According to the terms of a murdered relative's will, his trio of surviving family members each have to break a world record in order to inherit a share of his fortune.  I couldn't help but me reminded of a later strip called His Sporting Lordship (in Smash!) in which labourer Henry Nobbins had to break a world record in a series of sporting events before he could claim his hereditary title of Earl of Ranworth and the fortune that went with it. 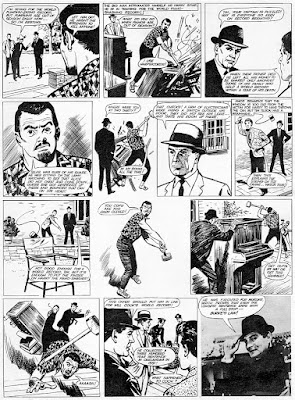 Only around four years stand between the two strips and I'm prompted to wonder if His Sporting Lordship was 'inspired' from this episode of Burke's Law.  Or could it even be that the same writer wrote both strips and he was simply recycling (with a bit of development) the basic plot of his earlier work?  Or was it all nothing more than a mere coincidence?  What do you think readers?  And if anyone happens to know who wrote both strips, don't keep that info to yourself now.

Comments and speculation (as well as solid details) most welcome.

I’m afraid I can’t help you on this one, Kid, as it’s a pretty obscure question. Your post did get me wondering why TV21 was running a Burke’s Law comic strip for a target audience much younger than the audience for the TV show. I do not ever remember watching the 1963 TV series at the time, although I do have memories of my much older sister-in-law talking about it when I was five years old. Funny how things stick in your mind. Our local nostalgia TV station Me-TV does run repeats of the show, along with Peter Gunn and other shows of the late fifties/early sixties, so you’ve inspired me to take a look.

I'd have said that Burke's Law was for a family audience, so kids would have known the character and perhaps been interested in reading a comic strip. Also, there was a Burke's Law comic in the US (perhaps by Dell or Gold Key), so the idea of Burke as a comic strip wasn't a new one. Burke's Law was revived in the '90s, still starring Gene Barry, and I very much enjoyed the show as it reminded me of watching the original run in the '60s.

On pure speculation I would say there's no connection in this case. I think there have been other more famous stories in a similar vein ( though can't think of one off hand at present). I really like His sporting Lordship strip, it's just good old fashioned British type comic strip -strange but compelling

It could always be a coincidence, McS, but I can just imagine someone reading the Burke's Law story and thinking "Hey, now that gives me an idea!" I'll have to search for the writers' names, as although I probably read before somewhere who they were, I've since forgotten.