My senses reel as I realise that the above comic - The MIGHTY WORLD Of MARVEL #1 - came out a staggering 46 years ago today, although 'today' was a Saturday back then on the 30th September 1972.  What's that?  The date on the comic says 7th October?  Yes, I know - that was the way of things back then - most comics carried the date of the following week so that they'd have a full seven days' shelf-life before any unsold periodicals were returned.

This was a great comic, and a step up from earlier reprint weeklies that had previously presented such Marvel tales.  For a start, MWOM had a few colour pages, as well as spot-colour, to distinguish it from the black and white ODHAMS PRESS publications from a few years before.  What's more, the number of colour pages actually increased a few issues later, beating its competition hands down for visual impact.  That didn't last too long though, and the internal colour was eventually phased out well before the mag's first year had elapsed.

However, the early issues of MWOM, containing The INCREDIBLE HULK, The Fabulous FANTASTIC FOUR, and The AMAZING SPIDER-MAN were some-thing special to British readers who bought it at the time.  Over the ensuing weeks some readers called for full colour throughtout, saying the comic could go monthly to accommodate this, but it was explained that UK comics were geared towards weekly publication, and that full colour on every page would be too costly.  How times have changed!  Now UK Marvel mags (published by PANINI) carry around 76 pages, and each one is in full colour and the same size of the US mags.

And what's more, MWOM is still around!  Okay, it hasn't been published non-stop since 1972, but it was revived in 2003 and has been going strong since.  (A previous revival in 1983 only lasted 17 issues.)  So enjoy looking at how it all started (and dig that crazy free gift transfer), and remember, if you were around at the time, what it was like to wake up on an autumnal Saturday morning 46 years ago, and then rushing to the newsagents to buy this brand-new comic before it flew off the shelf. 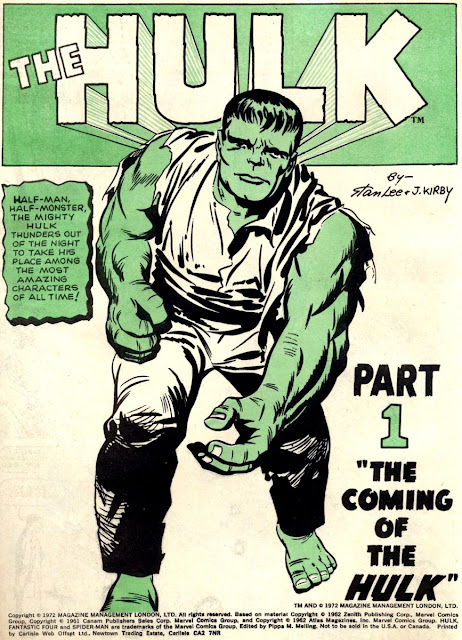 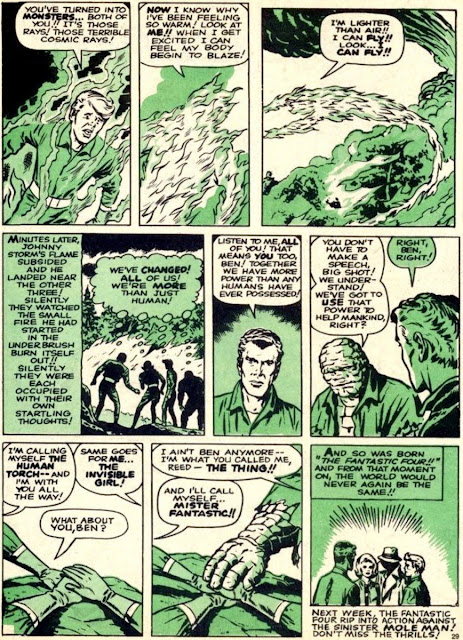 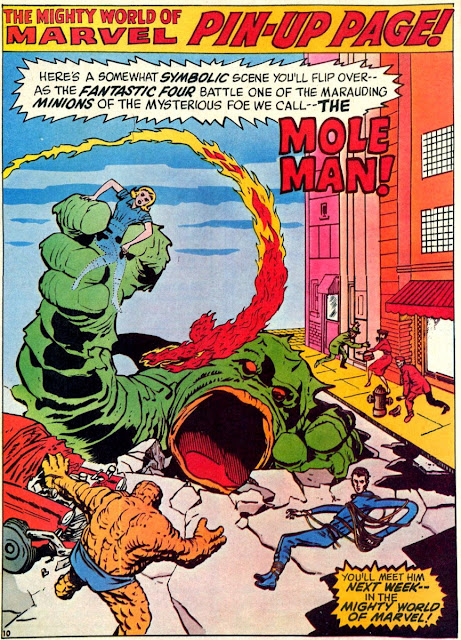 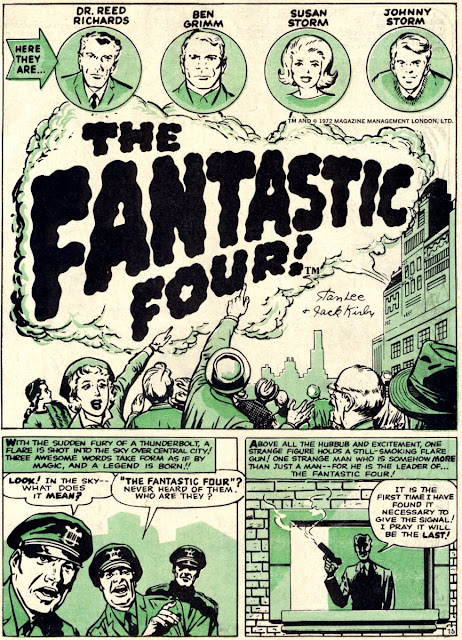 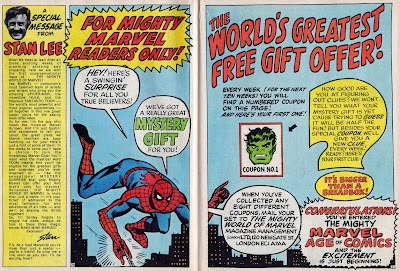 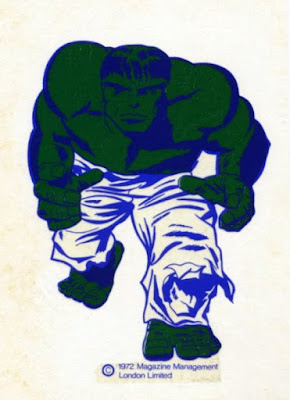 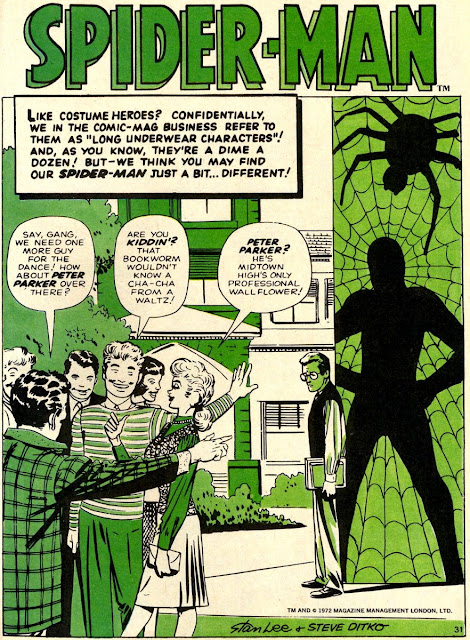 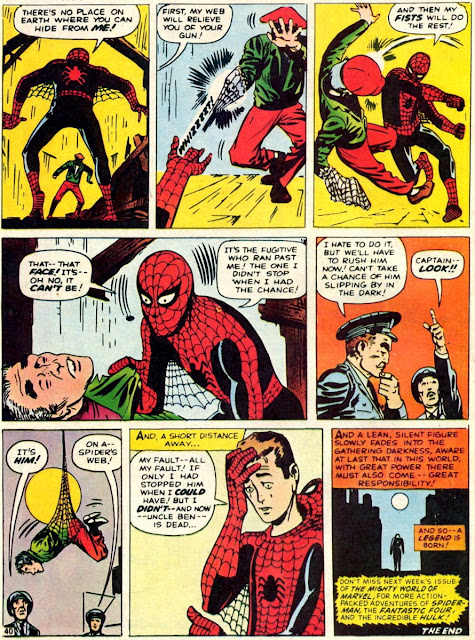 And if you're lucky, you may yet find the latest issue sitting on the shelf of your local newsagent's.  It's a 100 page special edition celebrating the work of the recently-deceased STEVE DITKO, one of Marvel's founding fathers.  Race 'round there now and buy a copy before it sells out, if it hasn't already.  And remember the cry - "Make Mine MARVEL!" 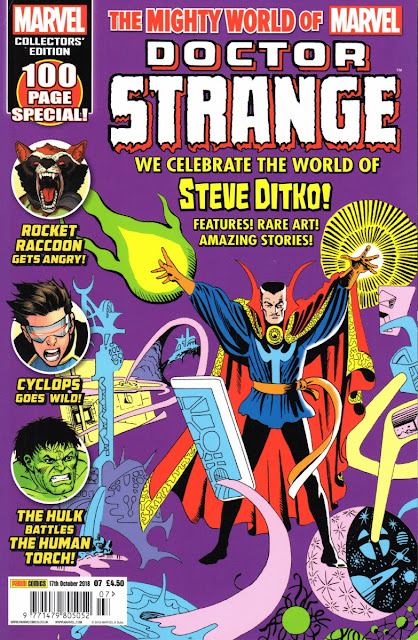 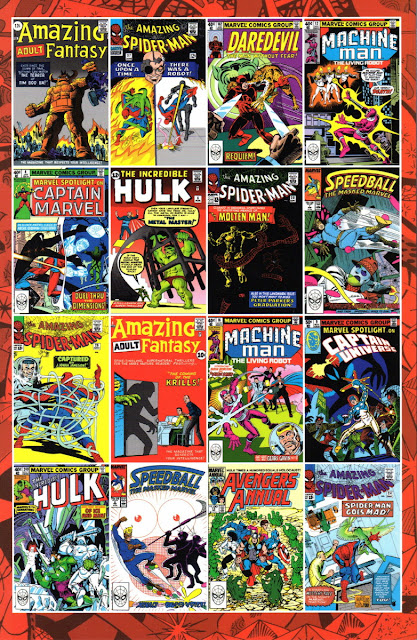 That technique of using one colour on an otherwise black and white page (is it called spot colouring, or have I imagined that?) always works really well.

I think if I'd never seen it before and someone described it to me, I'd expect it to look awful, but it always feels like it's creating the illusion of colour, and looks completely acceptable to me.

Maybe I just like it because I was used to reading UK comics in this style as I grew up? It would be interesting to hear what readers who aren't used to seeing it think.

No, DS, you haven't imagined it, you've remembered it - from the 2nd paragraph where I mentioned it. Some of the spot colour in MWOM and SMCW added to their charm - it's a pity it was short-lived.

My brain is all over the place tonight - its not even remembering things I read moments before!

I'd put it down to me having such a busy and tiring day, if I hadn't spent most of it lying on the couch reading!

I've lain on the couch reading on the odd occasion myself, DS. It can be very tiring, turning over those heavy pages.