The countdown has begun - 10... 9... 8... 7... 6 - but the next five will have to wait 'til Part Nine, which will be the final instalment of our TERRIFIC COVER GALLERY series we've been running over the last few months.  This current crop of covers and back-page POWER HOUSE pin-ups have artwork by KIRBY, DITKO, EVERETT and SMITH (yup, you guessed it - Barry Smith - before the Windsor), so they're not to be sneezed at.

Smith was only around 18 or so at the time he was drawing for ODHAMS PRESS, and the Kirbyesque influence is still discernible in his work.  A year or two later, he went to the U.S. with pal STEVE PARKHOUSE (reputed to also have contributed some pin-ups to the Power Comics), to seek fame and fortune.  Wonder what happened to them, eh?  Were they ever heard of again?

Regarding #38's cover, I recall reading the GIANT-MAN & HULK story within, and strongly associate it with Christmas-time.  (Which makes sense, as the comic is dated December 30th - though it would've come out the week before, on the 23rd.) However, the story had previously been reprinted in SMASH!, so I no doubt read it in that title also. 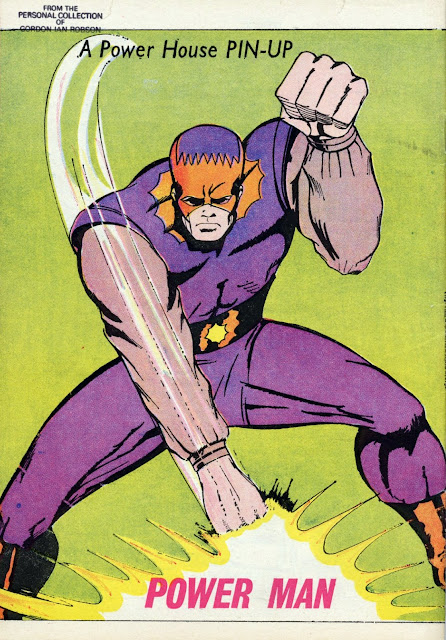 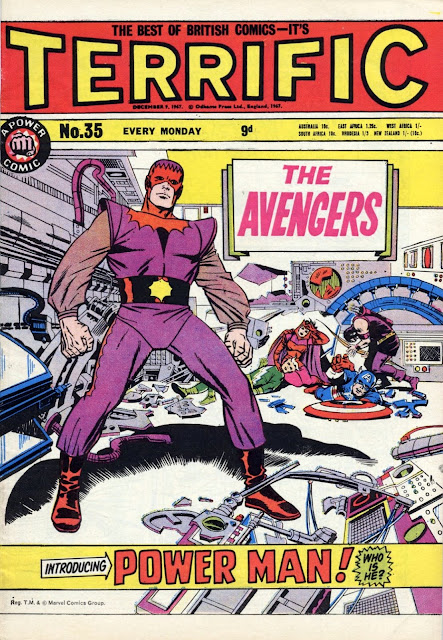 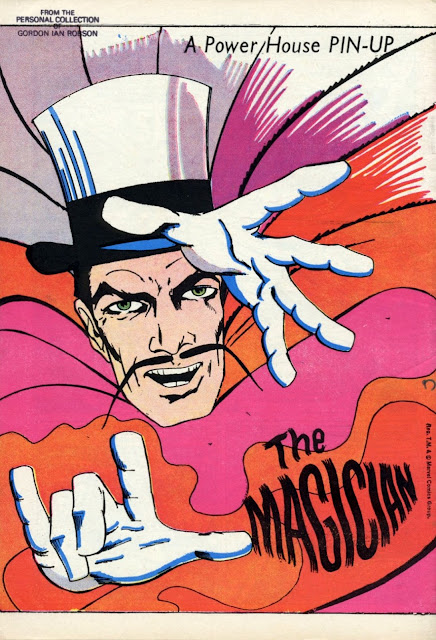 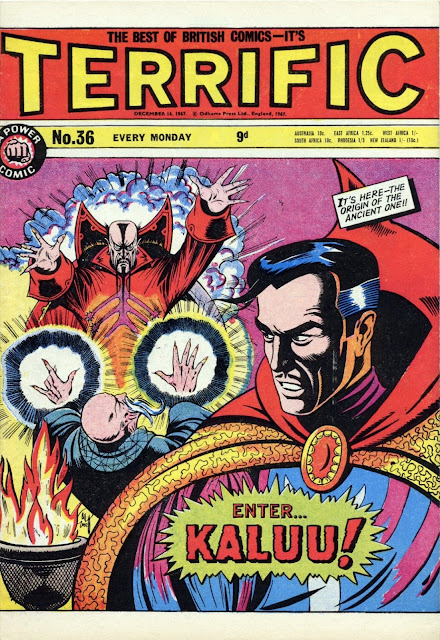 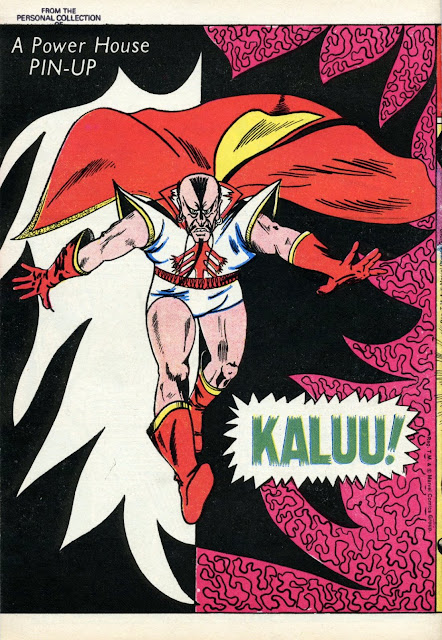 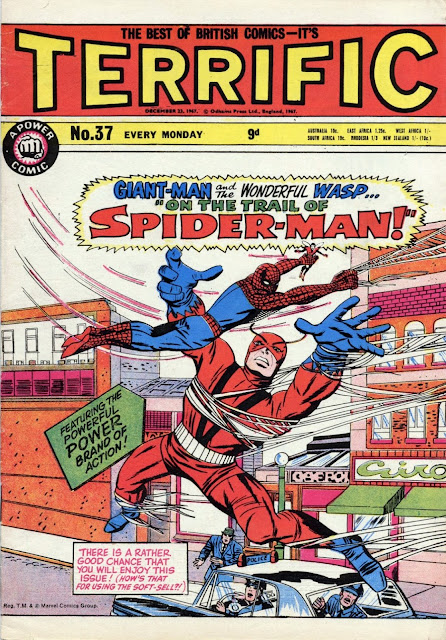 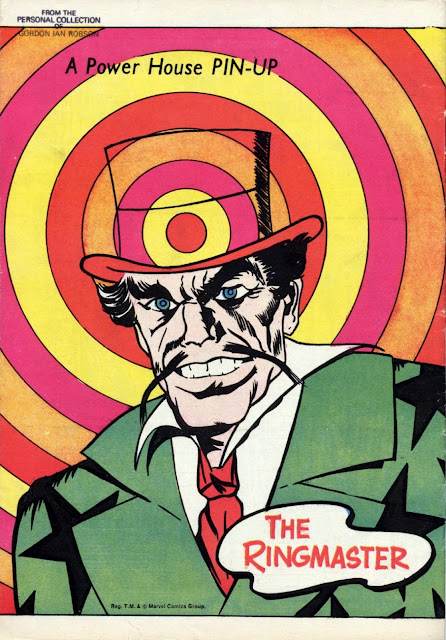 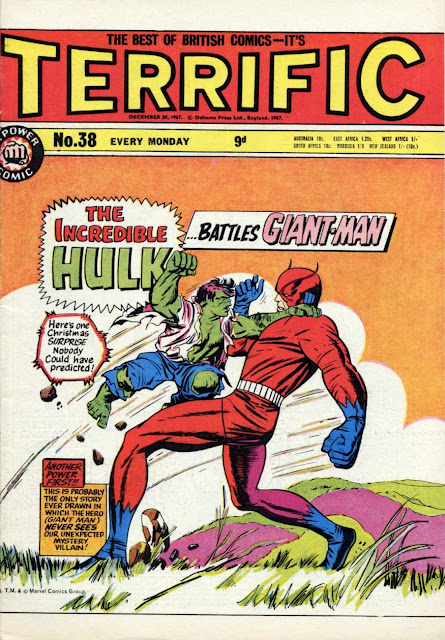 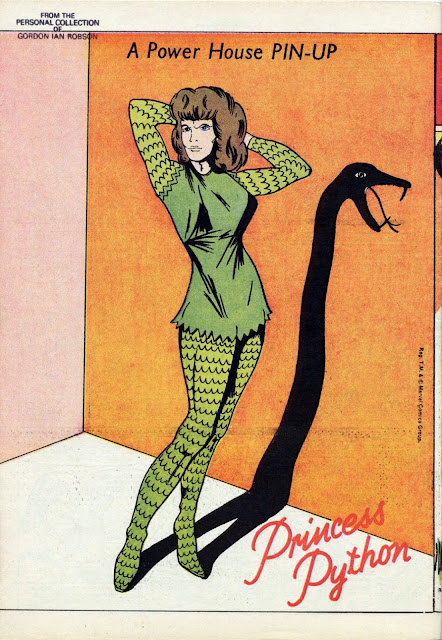 Tune in again soon - for the last part of this Terrific series.  You don't want to miss the final five.

I like that Princess Python poster - one for the feminists? Woman as two-legged snake :-)

And dig that crazy pink background to the Doc Strange cover! Groovy, man!

A feminist once called me a male chauvinist pig. So I said that it's better than being a woman who won't do as she's told.

I suspect that the Princess Python and Kaluu pin-ups may be by Steve Parkhouse (or someone else.)

I am always amazed by the Avengers cover with Power Man. He beats them and then strikes a macho pose! That's a bold cover for sure.

Not only that, Don, but he had time to switch the star on Cap's chest for an 'A'. (Well, somebody must've done it.)

I thought I was pretty clued-up on the comics from back then, but I have to admit that I'm drawing a blank with these ones. I can definitely say that I was buying comics in 1969, so I can only assume that this is ever-so-slightly before my time.

Well, the usual suspects, of course, for a young boy at that time - Beano Dandy, Beezer, Topper, Jag (pre-merger with Tiger). The only American comics I ever saw at that time were by accident, when my mother would drag me complaining around the shops of Paisley or Glasgow. Those were the days - those long, dreary days - before I chanced upon the delights to be found within Yankee Mags, hidden away as it was in the backstreets of Paisley's West End.

Loving this site. Hope you won't mind my sticking in a plug for my own Power Comics based fanzine PAST PERFECT which comes out every month and can be had off eBay or from my website www.nakedfairypress.co.uk or direct from me via email at pd.ware@tiscali.co.uk
Keep up the excellent work. Nice to know I'm not the only one to remember these works of art.

Plug away to your heart's content, Paul, and thanks for the kind words. Thanks also for reminding me that I've been meaning to send you some money for some issues of your excellent fanzine for a while now. I'll get on to that as soon as I can.

Although I couln't afford to buy it every week, Terrific was my preferred 'treat' or 'unexpected third choice' comic. One memorable day in 1967 there were TWO consecutive issues I hadn't read at a seaside town in Wales and the next two hours were spent very happily! I bought up all I required to finish an entire set in 1985 and of course, in 1987 I accidentally dropped a HALF LITRE bottle of black indian ink all down the side of my stack!

I can just imagine your despair, NP. Once the black ink was dry, you should've tried dropping a half litre bottle of process white down the side. Who knows? It might've worked.