Space may not have been the final frontier, it may have been one of the first. Especially in comics!

Unless you're old enough to have read comics in the 1950s (I'm not) those comics have been unavailable to you, in any quantity, until now.  Even DC and Marvel have stopped reprinting much from that time.  In our current decade PS Publishing and Gwandanaland have been reprinting many of these comics, giving people like me their first opportunity to read them. 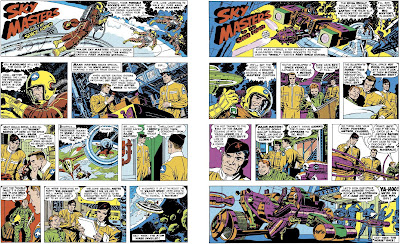 I wish I could tell you that I discovered this with great thought, but I really noticed it when fixing up my bookshelf.  (That's it below.) 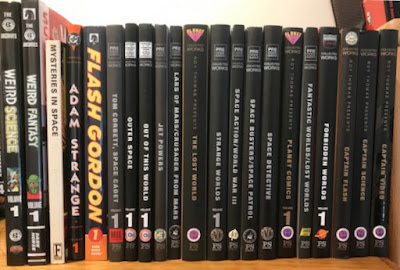 I knew that super-hero comics died out mostly before the 1950s, and that crime, horror and jungle girls mostly replaced them.  What I didn’t realize is how many comic books were devoted to outer space, space travel and the world of the future. Years before Sputnik and manned space flight, but during the time of a lot of Sci-Fi movies, there was a ton of “Outer Space” comic books.  Many “fantasy” comics would also include space and alien stories too.  Even the comic strips added Jack Kirby’s Sky Masters. And, in 1964, even Dick Tracy got in on the act by adding Moon Maid to the strip. 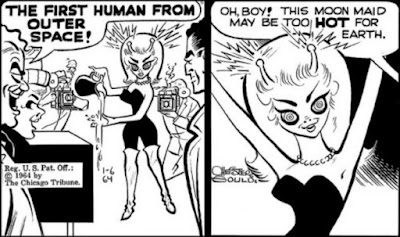 Interestingly enough, the “Outer Space” heroes, Superman from Krypton and the Martian Manhunter, spent little time in space during that period. Later, of course, Adam Strange, a super-hero, had stories in Mystery in Space, and Green Lantern belonged to a Universal Corp.

I've included some interesting scans from that era, including the batch of comics PS has put out. 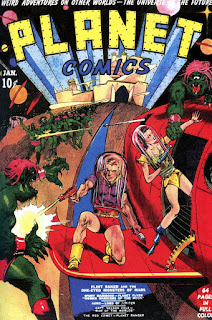 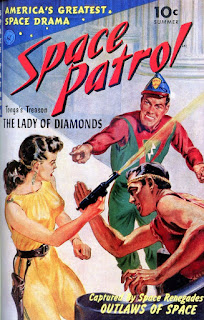 Below is a list of comic books (not strips). It's not complete or comprehensive, but gives a basic idea of just how many titles were out there. 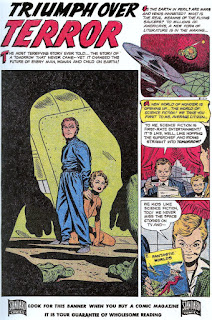 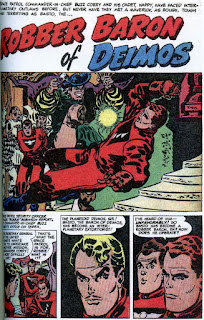 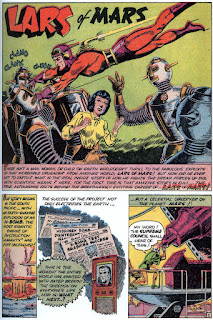 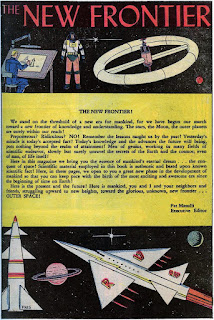 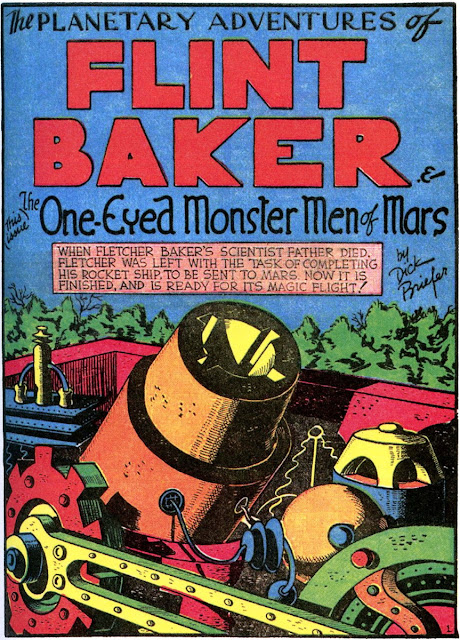 The only space comic book I can remember was that Space Family Robinson...the Swiss Family Robinson in space which encouraged that dreadful TV series Lost In Space...The comic was passable ...

I've got a Space Family Robinson UK Annual somewhere, which reprinted stories from the comic. I think the comic was by Dell or Gold Key.

I think it was Gold Key...They seemed to pick up the rights to TV based shows. eg.Man From Uncle....Twilight Zone..

I was favouring Gold Key, but I'm not 100% sure. I wonder how many people bought it thinking it was Lost In Space (when it wasn't quite)?

Dell and Gold Key/Western both published a lot of licensed adaptations of TV shows in the 1960s. Space Family Robinson was definitely by Gold Key. Some issues were reprinted by Western under their Whitman label in 1981.

It also ran as a secondary feature in the British weekly Lady Penelope. IIUC, the British strip used the Gold Key characters, but the stories were new, not reprints.

And the TV series premiered in 1965. It was titled Lost In Space to avoid confusion with the comic, but the premise (a science fiction Swiss Family Robinson) was so similar that the TV network feared a lawsuit. So, as a concession, they allowed Gold Key to add the phrase "lost in space" to the comic's covers. There must have been some confused (and maybe disappointed) kids who bought the comic in 1966-67, expecting a straight-up adaptation of the TV show.

BTW, Gold Key also published licensed adaptations of Voyage to the Bottom of the Sea, Time Tunnel, Land of the Giants, Star Trek, and The Invaders.

Speaking of TV adaptations, the Space Patrol comic shown at top was published by Ziff-Davis, and was based on the hit TV and radio series. That was an American series in the early 1950s, unrelated to the 1963 British TV show.

And Planet Comics was by Fiction House, who published both comics and pulp magazines. Their covers often had scantily-clad babes, and may have been aimed at a slightly older audience than DC's and other publishers'. Not adults, of course, but maybe teenagers.

IMHO, the Adam Strange series, in DC's Mystery In Space (and later reprinted in Strange Adventures), was one of the best Silver Age science fiction strips.

Talking of TV shows, Voyage To The Bottom Of The Sea appeared as a comic strip in '60s UK comic TV Tornado, but, as far as I recall, it was new material, not reprints. Thanks for taking the time to share all that knowledge with Crivens, TC. I'm sure the other readers appreciate it as much as I do.

See how polite and mannerly we are around here, TC? Good man, LH.

Hi Kid and the gang!

I wish there was a way to post pictures in the comment section. Not enough for a "full" blog I wanted to post and list the comic strips of that era that were also dealing with outer space. There were many.

Simple solution, BP - send me them the usual way and I'll add them to the post. (Though if there were many, surely there's be enough for a 'full' blog?)

Yes add them to the blog....looking forward to seeing them !

Correct me if I am wrong but Gold Key released Fireball XL5 in comics ..I recall having one with Steve Venus and Robot on the cover all holding weapons...Pretty certain it was a Gold Key comic.

Yup, but that was in the 1960s, LH. Incidentally, the cover and stories of that ish are on the blog somewhere.

Either Dell or Gold Key...This ones pointing towards Dell....were at one stage were releasing comics of big movies in the 6os . I remember having Around the World in 80 Days and Magnificent Men In Their Flying Machines comics...Dont think were Gold Key.. TC would probably know.

Thunderbirds Are Go also came out in Comic book form.

Kid posted the Gold Key Fireball XL5 and Supercar comics on this blog in March 2012 and January 2016, respectively.

Gold Key published Those Magnificent Men In Their Flying Machines in 1965. Like Dell, they published a lot of movie and TV adaptations. Some sources (such as Mike's Amazing World of Comics) list each title individually as a one-shot (Those Magnificent Men in Their Flying Machines #1, Beneath the Planet of the Apes #1, Yellow Submarine #1), while others (Overstreet's Comic Book Price Guide) list them under the umbrella title Movie Comic.

I feel so impoverished, TC - I only have the Fireball comic out of that lot. (Two copies.) Thanks for the info - I'm sure the others are also grateful.

Yes very grateful. I found all this very interesting... Thanks guys .

Very rewarding to hear (read), LH. The responses will make BP's time and effort in doing the post worthwhile.